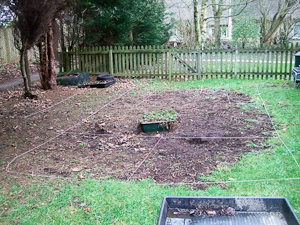 If you’re a user of the village hall, or if you pass by on the way to school or the surgery, you’ll probably have noticed that the small garden at the rear of the hall has been looking pretty sorry for itself of late. The Yatton Keynell Under 5s pre-school have been itching to improve the garden to make it a safe, fun and educational place for the children to use and to help increase pre-school numbers by adding a unique outdoor space. 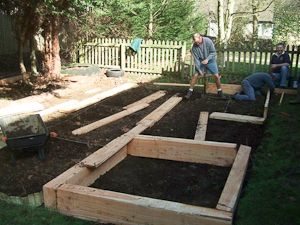 So last weekend, in the Spring sunshine, a group of parents past and present, friends and children arrived armed with tools, cake and tea and set about transforming the space. The pre-school has a large number of outdoor toys to store so the first job was to build two large sheds to replace the worn-out metal store box.

Whilst that was happening, a huge pile of timber was cut, drilled and screwed to build a series of areas within the garden, including a sand pit, bark pit, raised beds and a digging area. 2 tonnes of gravel was shifted by hand, whilst log stepping stones were set out and a water butt installed in a cobbled area. 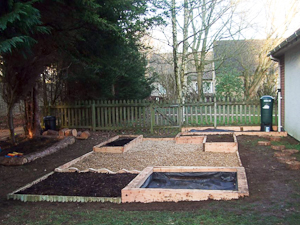 Finally, a jet washer was put into action to clean up the mosaic path behind the hall which was virtually invisible through the build up of years of dirt and grime.

The first group of children brought in to test things out gave the new garden an enthusiastic thumbs-up.

Many thanks to all who helped out!