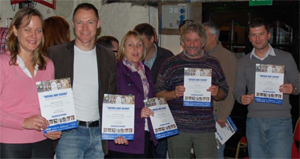 In mid‐June, over 90 people took part in the Wrong Way Round bike ride. In mid‐September about the same number gathered again at the Bell in Yatton Keynell to relive the event with other participants, as well as to receive certificates and other awards marking their achievement.

The crowd was welcomed by Bob Penny, Steve Beavan and David Else, the Wrong Way Round organisers. David recalled the original conversations in 2008 when the ride was first mooted, inspired by the iconic Yatton Keynell milestone that says ‘To Hyde Park Corner 97 miles’. Astutely realising that cycling TO Hyde Park meant ending the ride in London, the idea of cycling FROM Hyde Park back to Yatton Keynell quickly took hold. The Wrong Way Round bike ride was born. 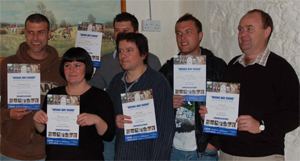 Now in its second year, the Wrong Way Round is already established as a regular event on the calendar, inspiring many local people to dust off their bikes and join in ‐ for charity, for a personal challenge or just for fun. For 2010, about 45 riders went for the ‘Classic’ 97‐mile route, while the remaining 50 went for the hardcore 114‐mile offroad option or the more relaxed 38‐mile ‘Halfway’ and 40‐mile ‘Avebury’ options. 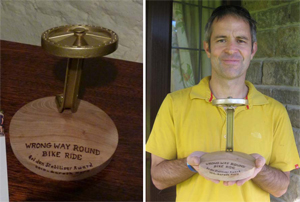 Parish Council Chairman Chris Dash presented certificates last year, but was unable to attend this year, so Bob Penny stepped up to the mark in his role as Parish Councillor. Certificates were awarded to all participants, and some special awards were also presented: Gareth Hare of Castle Combe received the Golden Stabiliser Award, for managing to fall off his bike at least three times during the ride; Kevin Jones of Yatton Keynell received a bacon sandwich for his efforts to be fastest rider on the day.

The Chairman’s Cup is awarded each year to the participants that epitomise the spirit of the event, and 2010’s winners were the ‘Wee Waifs’ team of Matt Rimes, David Wild, Andy Pitman, Dominic Eaton and Richard Philips. Handing over the cup, Bob recalled seeing the group at about the 60‐mile point, when one of their number (suffering from a serious injury incurred some years ago) felt like quitting, but the others rallied round and together they all completed the whole distance. 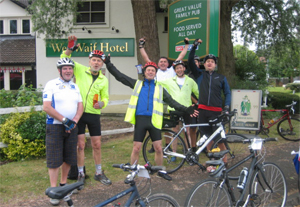 Although the Wrong Way Round is not specifically for charity, several participants raised money. These included:

In total over £5000 was raised for charity by Wrong Way Round sponsored riders. In addition, a part of all rider entry fees went to charity. This year £400 was raised for four local good causes:

The organisers thanked the many people that helped make the Wrong Way Round a success:

A big thank‐you also went to the event sponsors:

Next year’s ride is Sunday 12 June 2011 ‐ the second weekend of June, and the weekend before Yatton Keynell Village Fete. Put it in your diary now!