Wrong Way Round cycle ride… …to be recycled! 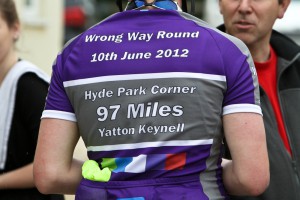 After four years of great success for riders, spectators and good causes, the organisers wish to announce that the Wrong Way Round cycle ride will be taking a year off in 2013.

Over the next few months, discussions will be held to develop the event into something new and even more fun in 2014.

When originally conceived during a late night discussion five years ago in The Bell Inn, the aims of the event were to:

We are delighted that the previous four events have been so well supported, with up to 130 riders taking part, but the Wrong Way Round cycle ride has evolved and is now attracting more riders of better ability, with not as many cycling newcomers as originally intended.

We are also seeing more participants from outside our area, and not so many from (or with a connection to) Yatton Keynell and the surrounding villages.

So, for 2014, we plan to return the Wrong Way Round to its roots and original aims with a new format. We hope this will encourage more local people to take up regular cycling in groups, for simple enjoyment and to ‘get in trim’ for our new village cycling event.

Our thanks go to everyone involved in the four Wrong Way Round cycle rides since 2009 – riders, supporters, helpers, friends and families. During this ‘fallow year’ we would also appreciate all your ideas and thoughts on revitalising the event for years to come.

Look out for the new event in 2014. Dust off those bikes, build those muscles and develop your stamina.