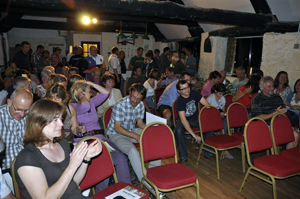 In mid-June, over 130 local people from Yatton Keynell , Biddestone, Allington, Castle Combe and other surrounding villages took part in the Wrong Way Round bike ride. In late-September many of them gathered again at the Bell Inn in Yatton Keynell to re-live the great day, as well as to receive certificates and other awards marking their achievement. 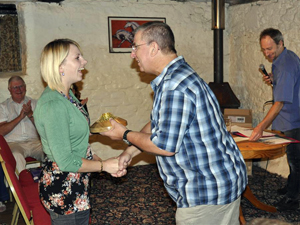 The crowd was welcomed by Steve Beavan and David Else, two of the Wrong Way Round organisers. In his opening speech, Steve reminded everyone of the weather conditions in June, when cyclists surely suffered one of the wettest days of the so-called summer. Steve also recalled the day in 2008 when the bike ride was first mooted, jointly inspired by the iconic Yatton Keynell milestone that says ‘Hyde Park Corner 97 miles’ and the enthusiasm of another Wrong Way Round organiser and Yatton Keynell icon, Bob Penny.

Unfortunately, due to a date-clash, Bob could not be at this year’s award ceremony, but without his original encouragement ,the event might have remained a pipe-dream. Instead, thanks to the hard work and support of local residents, the Wrong Way Round is now firmly established as a regular date on the calendar, inspiring many people to dust off their bikes and join in – for charity, for a personal challenge or just for fun. 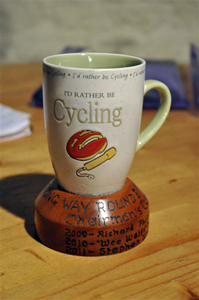 In this year’s event, about 80 riders went for the ‘Classic Route’ option – the original 97 miles from Hyde Park Corner to Yatton Keynell – while the remaining 50 went for the more relaxed 38-mile ‘Halfway’ options or the 40-mile ‘Loop’ to Avebury and back. The awards ceremony was their chance to bask in the applause of fellow riders, as certificates were presented to all finishers.

In addition, several special prizes were handed out. Most prestigious of these is the Chairman’s Cup, awarded each year to the participant that best epitomises the spirit of the event. This prize was initiated by former Parish Council Chairman Chris Dash, and presented this year by current chairman Julian Davies. The worthy recipient was Stephen Wright for his self-less support and encouragement to another rider for much of the distance, even at one point handing over his own rain jacket when the inclement conditions seemed likely to bring on a case of genuine hypothermia. 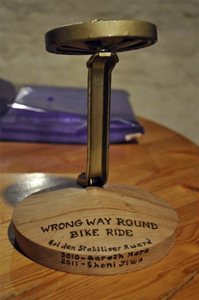 The famous Golden Stabiliser Award – for the most spectacular, but harmless, accident – was presented to Sheni Jiwa of Biddestone for an unfortunate brush with the tarmac resulting from a misplaced fit of enthusiasm on a slippery roundabout.

New for 2011 was the Golden Sprockets Award, for the unluckiest mechanical breakdown, presented to Hannah Ryan for dealing with a serious gearing problem before the ride even started, and then continuing on the route even as her bike imploded and weather conditions got steadily worse.

Also mentioned in dispatches were several other riders: Ian Bannister for managing to collide with a stationary bollard in Monkton Park; Brian Mathew for using the ride as part of his training for the five-day Tour de Timor endurance race; Harry Long and the Midnight Posse for sticking together after their impressively early start. 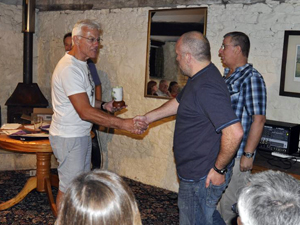 Although the Wrong Way Round bike ride is not specifically for charity, all profits go to local good causes. This year, £800 was given to Yatton Keynell Under-5s pre-school, Yatton Keynell Youth Club, the Friends of By Brook Valley School (FOBBVS) and St Margaret’s Church Remodelling Fund.

In addition, several participants raised money for their own favourite charity. These included: Gareth Hare – £400 for Help for Heroes; Paul & Chris Leonard – £600 for Hammer Out, the brain tumour charity; Nick Parsons and the KB team – £850 for Cancer Relief; Karen Faulkner-Davies £200 for Support Dogs UK; Nicola Dolman – £700 for PROPS (Providing Opportunities and Support) for young disabled children.

To close the awards ceremony, David and Steve thanked the many people that helped make the Wrong Way Round bike ride such a big success: Mark and the staff at The Bell for providing the venue and supporting the event so generously; the ladies at Yatton Keynell village shop for taking the entry forms; Will Lawton for providing the PA system; Kevin Worlock and James Skinner for driving the vans, and James for handling our on-line presence ; Vernon Hughes for crafting and engraving the prizes; Stephen Slade for being head steward, and all the stewards from FOBBVS, YKu5s and the church for helping to ensure cars drove through the village at a sensible pace; Mark Tedds for the communications equipment; Catie Dash and Charlotte Rogers-Jones for being excellent Clerks of the Course. Special thanks also went to Charlotte and Rosemary Penny for providing emergency towels for all the riders. And boy, did they need it.

A big thank-you also went to the event’s commercial sponsors: Hatt’s Coaches and Norman Webb Transport Services for the vehicles; Phillips Car Bodywork for bollards and barriers; Campack for protective transit material; Andy Cook Cycling for the warning signs; RipeDigital for the posters and publicity material; Schweppes Abbey Well for the water (in case the skies hadn’t provided enough).

The Wrong Way Round awards evening ended with another round of applause, with everyone promising to be back for more next year – whatever the weather.

There are more photos, courtesy of Mike King, in our gallery.