Now in its third year, the 2011 edition of the Wrong Way Round bike ride on 12 June was certainly a day to remember. Torrential downpours flooded the route, but nothing seemed to dampen the enthusiasm of over 130 cyclists taking part, and once again the event was hailed as a great success.

The ride itself is inspired by the iconic ‘Hyde Park Corner’ milestone in Yatton Kenyell, with many participants coming from the village, plus others from Biddestone, Castle Combe, Allington, Burton and the local area. Also taking part were riders from Bath, Chippenham, Sussex and Wales. Participants from even further afield included Brian Mathew, sometime of this parish but currently working in East Timor. 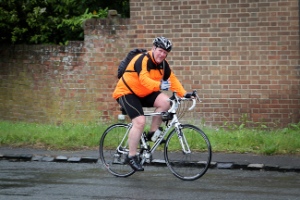 The day began very early for some riders, when a team including Abbie and Harry Long departed Hyde Park Corner at midnight. A few hours later, between 5am and 6am, the main batch of riders on the 97-mile ‘Classic’ route cruised out of London. Bright sunshine and a favourable wind meant the first couple of hours were enjoyable, but by 9am the rain had started, and that set the tone for the rest of the day.

The faster riders, including Tim Williams, were setting a good pace and managed to escape the worse of the weather. Other riders spotted going well at the 50 mile mark included Jonathan Crookall, David Wild and Andrew Moseley. 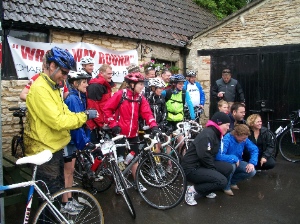 By around 10am, riders from Hyde Park Corner were passing the Halfway Inn near Hungerford, and were very grateful for the hot drinks and bacon rolls served by the affable landlord. Riders on the 38-mile ‘Halfway’ route, including Jackie Ball and Eddie Shaw, were also starting here and heading towards home.

Meanwhile, in Yatton Keynell, more riders on the 42-mile ‘Avebury’ route were setting off, including Pam Rawlins and Lisa Beckenham, equally undeterred by the rain. They were joined by riders on the shorter (and inappropriately-titled) Midsummer option. Despite the weather, there were very few cancellations on the day – a major credit to all participants. 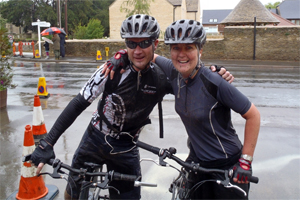 The first riders back from London arrived in Yatton Keynell well before noon, having completed the distance in under 6 hours. Some had pushed themselves physically, and were extremely grateful for the hot drinks provided by the Bell Inn and the dry towels provided by the base support crew.

Between 1pm and 4pm the rest of the riders arrived. Especially pleased were those that completed the Halfway option last year and upgraded to the Classic for 2011, including Ben Blackwood, Sheni Jewa and Colin Hope. Also buoyant at the end was Nick Parsons; thanks to a secret ingredient in his sandwich box he completed the route more than two hours quicker than last year. Other mentions go to Gareth Hare – not content with riding 97 miles along the A4, he diverted onto the Kennet & Avon Canal Path and upped his distance to well over 100 miles. 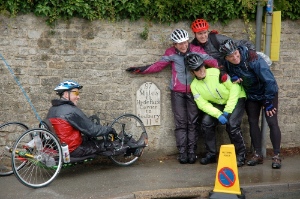 Throughout the afternoon, as the riders arrived, everyone was wet, some were cold, and others were covered in mud. But everyone was smiling and delighted with their achievement. “It’s called a challenge ride”, said one finisher, “and I can vouch that it was definitely a challenge – but I loved it!”

In return, the organisers would like to send a big congratulations message to all the participants. You were all absolute stars. 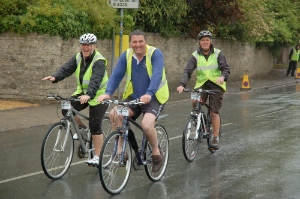 Where did he start from?

We’d also like to thank the many helpers and supporters that made the event possible: Mark and his team at the Bell Inn for providing the facilities at the finish, Stephen Slade and all the stewards for putting out the warning signs and standing in the rain wearing hi-vis jackets to make sure the car traffic behaved; the team from FOBBVs and Yatton Keynell under 5s for their help; Will Lawton the sound equipment; Cate Dash, Charlotte Rogers-Jones and Rosemary Penny of the base support crew; Kevin Warlock for driving and providing the crowd-control barriers; James Skinner for driving, logistical support and technical know-how; Andy Cook Cycling for the warning signs; Paul McCormack, Jim Baggett and Richard Garside for being the ‘sweeper team’ through London to ensure all riders got safely on their way. 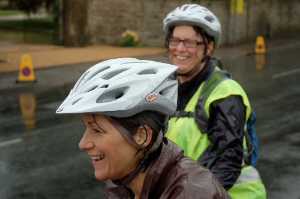 Happy to be home

Also, big thanks to our commercial sponsors: Phillips Car Bodywork for safety bollards and other support; Norman Webb Van Hire and Hatts Coaches for the transport; Ripe Digital for printing the leaflets and flyers; Schweppes Abbey Well for the water (in case the skies hadn’t provided enough).

All riders and supporters are warmly invited to the traditional post-event reunion and certificate presentation on Thursday 29 September. We’ll send a reminder nearer the date and hope to see you then. Meanwhile, for updates and photos of the event, please keep an eye on localhost, follow @YattonKeynell on Twitter or sign up for a newsletter.

Once again, thanks to everyone that took part. The ride was initially conceived as an event to bring the community together, and for everyone to just have a good time. We seem to have achieved both aims, despite – or maybe thanks to – the weather!