During that time Richard has worked on the stud farms at Coolmore and Highclere, the pedigree research and advertising office of Primus Advertising and the Nominations Departments of Darley and Juddmonte, gaining first-class all-round experience of the Bloodstock Industry.

This experience has already proved itself. From the few horses Richard has purchased to date, they include Gr.2 winner & Gr.1 placed filly Up In Time who was purchased for 24,000gns as a yearling and sold during her 2yo year for considerable profit to the USA. Another high class purchase is 2012 & 2013 Black-type winner Garswood who was purchased as a foal for 19,000gns.

Richard has also enjoyed success in the pin-hooking market with recent Goffs Orby graduate Lot 59 selling for €130,000. A handsome return on the €42,000 purchase price as a foal. Another success was Brazen (a 40,000gns foal and an 80,000gns yearling) – a 6-length maiden winner on only his second start.

But it’s the breeding side of the industry where Richard has spent most of his time to date, helping breeders with mating plans (& producing Classic winning results), offering advice on where to sell their foals and yearlings and in purchasing mares. 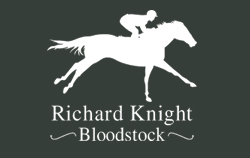