A tradition dating back many generations, the village Fete takes place each year on the third Saturday in June on Jubilee Field, named in honour of the Queen’s Silver Jubilee in 1977. That year the field was transferred back to the village by the MOD having been taken over by the War Dept. during World War II for military use.

The Fete has two objectives. To provide a fun event for the village and local communities and to raise money to support a range of village activities. Each year the Fete has a theme. In 2007 it was the art of Falconry with a static and flying display by these birds of prey forming the centrepiece to the event. 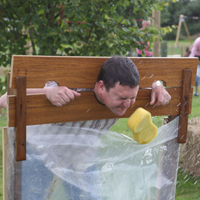 Alongside the main event are the money raising activities; the café, the beer tent, the cake stall, the pig roast and many others. Punch and Judy and the various games stalls keep the children amused. The entire event requires a considerable amount of organisation which is undertaken by the Village Fete Committee. The committee meets regularly throughout the year and is always on the lookout for new members. New blood and fresh ideas are always welcome.

In addition to the volunteer members of the committee each village organisation which benefits financially from the Fete sends a representative. These organisations are:

There are many other individual volunteers who, on Fete Day, help on the Field to erect tents, provide tables and chairs, man the stalls and the hundreds of other tasks that together contribute to the Fete’s success. The Fete is the village’s major annual event and its continued success depends on the goodwill and the support of everyone in Yatton Keynell.